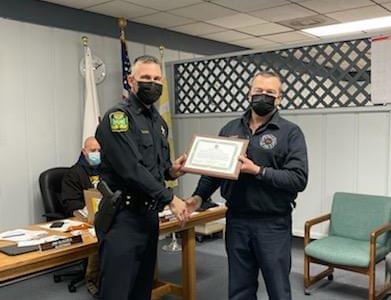 At Monday night’s Polo City Council meeting, Chief Rockwood presented four Certificates of Recognition. These individuals were recognized for their life saving roles from a recent apartment fire.  In the early morning hours of January 7th 2021, Polo Police and Polo Fire Department responded to a structure fire at the apartments located at 709 E. Webster Street.

First on scene, Officer Troy Randall, observed smoke coming from the building and smoke inside of the building.  Officer Randall, knowing one particular resident that was unable to walk under their own power, located and woke the individual from an outside window. Officer Randall then, while risking his own well-being, began trying to rescue the individual through the window.

Fire Captain Brent Shipman was also recognized for his leadership at the scene and for his life saving actions. While the other rescue was under way, Captain Shipman located another individual in the south east corner of the building. Captain Shipman then rendered aid to the individual and led them away from the burning building; also saving their life.