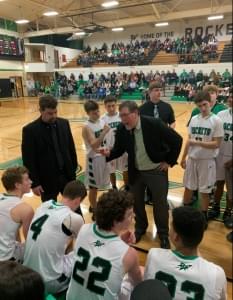 Bureau Valley CUSD #340 hired Brad Bickett as their new Athletic Director and Dean of Students. Bickett recently stepped down after eight years as head boys basketball coach at Rock Falls High School.
Bickett has been a teacher at Bureau Valley for 25 years and admits that its a tough challenge to teach in one district and coach in another, “You always worry about, are you giving it your all at both places. I felt like maybe I wasn’t giving it my all at both places. I have four years left in education, so this was a good time for me to step up and be a leader as a Dean of Students and Athletic Director at Bureau Valley.”
Bickett has been a head boys basketball coach for 28 years with an overall record 490-314. He coached at Buda Western from 1990-1995. Buda Western was part of the consolidation and moved into Bureau Valley High School in the 1995-1996 school year. He went 287-150 at Bureau Valley from 1995-2010. Bickett then took over at Rock Falls in 2012 and won 134 games for the Rockets in 8 years.
Bickett admits leaving the sidelines as a coach was a tough decision, “It was a tough decision because I have a passion for coaching basketball. Each team that coach is special to me. So leaving the game as a coach is something I didn’t take lightly.”
The search is on at Rock Falls for a new head boys basketball coach as Brad Bickett was named the new Athletic Director at Bureau Valley.
Copyright © 2020 by NRG Media. Internet Development by Frankly Media.