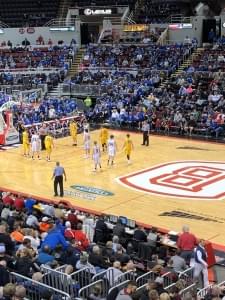 The Illinois High School Association (IHSA) announced on Thursday that it will limit attendance at the remaining games in the 2020 IHSA Boys Basketball State Series, as well as at other IHSA events.

The IHSA says that no more than 60 spectators per school be allowed in the arena for each contest at this weekend’s Class 1A and Class 2A Boys Basketball State Finals.

The IHSA currently plans to invoke the 60-spectator per school limitation across all remaining basketball games this season including the Class 3A and 4A Sectionals, Super-Sectional and State Tournament next weekend.

The IHSA has also postponed several other activities:

The Class 1A & 2A Finals of the Three-Point Showdown have been postponed. This event was supposed to begin on Thursday afternoon.

The March Madness Experience in the adjacent Peoria Civic Center exhibit halls will not open this weekend.

The state basketball welcome dinners have been canceled.

The Wheelchair Basketball State Tournament on March 20 & 21 has been canceled.

The Learning From the Legends Clinic on March 21 has been canceled.

The Student Section Showdown winner announcement has been postponed.

All-State Team and IESA champion recognition will not occur.