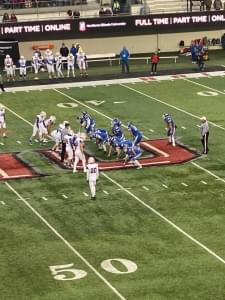 Newman quarterback Jacob Ackman threw two big touchdowns to Connor McBride to propel the Comets to the win. Ackman finished the day 3-5 passing with 112 yards and the two touchdowns. McBride also rushed for 64 yards and one rushing touchdown.

The biggest play in the game came with 8:51 left in the 4th quarter. Nashville, trailing 28-14, had momentum but a pick-6 by Brett Newman gave Newman a 34-14 lead and the Comets were never threatened again.