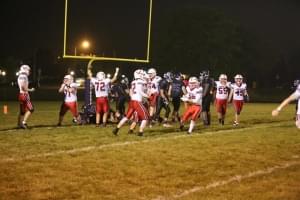 When the 2019 High School Football season kicks off on Friday August 30th, Friday Night Lights will look a lot different this year in the Big Northern Conference.

Traditionally, on a Friday night, the Sophomore game would be played at 5pm with the Varsity game to follow at 7pm. However, due to recent rules changes through the IHSA, the Big Northern Conference will now their Sophomore games on Monday night.

The talk surrounding the 2019 season was to the play Freshman games on Friday night at 5pm with the Varsity game at 7pm and the Big Northern Conference is going to implement that idea into their Friday night schedules.

The six schools that do not have a Freshman football team, as of Thursday August 15th, are- Oregon, Rockford Lutheran, Rock Falls, Mendota, Winnebago and North Boone.

In week 1, there will be two games played at Stillman Valley when the Cardinals host Dixon but there will only be one Varsity game when Oregon hosts Rockford Lutheran.