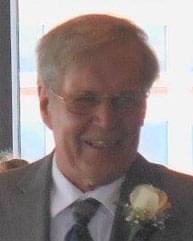 He worked as a couselor at Katherine Shaw Bethea Hospital and then went on to work for Northwestern Steel and Wire in Sterling prior to his retirement.

John was born, October 4, 1951, in Morrison, IL, the son of Herman and Betty (Melsness) Abbas. He married Patricia Cornwell on June 20, 1985, in Dixon, IL. John and Patricia enjoyed many years of camping at their favorite park in the Rocky Mountains, going to flea markets and refinishing pieces of furniture together. He was a life long cubs fan and an avid reader, mainly books on politics, but most of all loved spending time with his children and grandchildren.

John was preceded in death by his parents.

A memorial visitation will be from 9-11:00 a.m., until time of memorial service at 11:00 a.m., on Saturday, August 17, 2019 at Preston-Schilling Funeral Home with Pastor Jack Briggs. Cremation rites have been accorded.

In lieu of flowers, a memorial has been established.