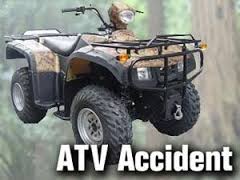 Just before 8:30 Sunday evening, Carroll County Deputies responded to a call reporting a Burlington Nothern Santa Fe train had struck two ATV’s.  The accident was near the intersection of Daggert Road and Salem Road.

Reportedly the two ATV’s were traveling eastbound on the railroad tracks and did not hear a train approaching from behind.  Both operators were able to jump from their ATV’s just prior to being struck by the train.

React Helicopter transported one juvenile male subject to a hospital in Rockford.  He is currently listed in stable condition.

Authorities could not initially find the second driver.  A large search involving several departments was conducted.  Several hours later the second victim, Wade Lindstrom of Thomson, was located and transported to CGH Medical Center and treated for non-life threatening injuries.

The accident remains under investigation and the sheriff’s department says charges are pending.