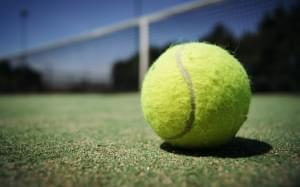 The Coloma Township Park District will host the Jeffrey “Todd” McThenia Memorial Tennis Tournament to benefit the Cancer Fund.  Todd was a 1983 Graduate of Rock Falls High School and played on the Varsity Tennis Team.  He went on to play tennis for 2 years under Coach Frank Palumbo on a scholarship at Sauk Valley College.  From Sauk Todd received a scholarship to play at St. Francis College in Joliet.

While attending St. Francis College over Christmas Break in 1988 Todd received tragic news that he had cancer.  Todd began his treatment immediately.  His days consisted of a treatment everyday, Monday through Friday, attending classes and participating in Tennis practice.  Todd was a computer science major and during the whole time he kept up this grueling schedule he was able to make the “Dean’s List” for grades.

After a valiant fight Todd passed away on March 9, 1991 at the young age of 26 years.  Todd’s many friends especially Marc Wolens and Dick Akridge began and still continue to direct the tennis tournament in Todd’s honor.  All proceeds from the tournament go to the Whiteside County Cancer Fund to be used locally to help cancer patients.  Everyone is welcome to play in the tournament and donations are welcome.  Donations can be sent to the Whiteside County Cancer Fund or to the Park District in Todd’s name.

The Todd McThenia Memorial Doubles Tennis Tournament sponsored by Wheelock Furniture and the Coloma Township Park District will be held on Saturday, August 17, 2019.  All entrants may play Mens and Womens Doubles beginning at 9:00 am and Mixed Doubles at 1:00 PM.

The Tournaments are open to all persons 16 and older wishing to participate.  The Tournament Directors will be Marc Wolens and Dick Akridge.

Matches will be played at the Tennis Court facilities located in Centennial Park in Rock Falls Each team must supply a new can of Championship balls.  Winners keep the new can; losers take the used can.  Balls must be yellow and not seconds.

All of the Tennis Courts at Centennial Park will be closed to the public on the days the Tennis Tournaments are being played.  Rain date for the tournament will be Sunday, August 18, 2019.

If you have any questions on this Special Event, please contact the staff at the Coloma Township Park District Administrative Office at 508 East 11th Street in Rock Falls or phone 1-815-625-0272.