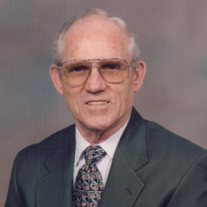 On Wednesday, August 7th, 2019 Richard Earl (Dick) Dewey of Mendota, died suddenly in his home at the age of 86.

Dick was born September 20, 1932 in Amboy, Illinois to Earl and Alice (Andrews) Dewey.  In 1949 Dick joined the army and served as a military driver in Tokyo, Japan for high ranking officers and served in battle in South Korea as a tank driver during the Korean War.   In 1953 Dick married Shirley Hubbell, remaining married 37 years.  In the 50’s Dick operated a milk route in the Amboy area.  In 1958 Dick sold the milk route and attended barber school.  Dick was a long time barber at the former Dixon State School from 1964 – 1982.  He was a practicing barber for 60 years having just sold Dick’s Lakeside Barbershop, in Mendota, earlier this year.

Since childhood Dick has been an active member of the First Baptist Church in Amboy.  Dick was married in the church.  For decades Dick has generously volunteered his time at the church as Deacon, Sunday school teacher and choir singer.  This summer Dick joined in and helped with the church’s youth camp and vacation bible school.   Dick was a member of Mendota’s VFW Post 4079.  He loved to travel, including annual family Canadian fishing trips.  Dick also loved driving whether it be an army tank, a milk truck, a boat an Oldsmobile or an Escalade – all sorts of tanks.  Dick greatly enjoyed his weekends spending time with his family, helping with projects and enjoying meals together.

Dick will always be remembered as a generous, patient and loving person, father, grandfather and great grandfather.

Funeral services will be held Tuesday August 13, 2019 at 10:00 AM at the First Baptist Church in Amboy with the Rev. Rocky Fritz officiating.  Burial with military honors by the Amboy American Legion will follow at Prairie Repose Cemetery in Amboy.  A memorial has been established. Condolences may be sent to www.thejonesfh.com.