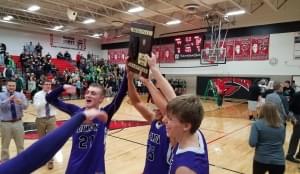 The IHSA announced that the basketball state tournament will be held on one three-day weekend starting in March 2021.

Under the new format, according to the IHSA, each class will still have four state teams qualify for the state finals.

The girls post-season will begin one week prior to the state of the boys post-season tournament beginning in 2021.

All four classes are expected to begin the Regionals at the same time and play title games on the same Saturday.

The IHSA also announced it will soon start accepting bids to host the new format tournaments in 2021. The girls currently play at Illinois State University’s Redbird Arena. The boys currently play at Carver Arena in Peoria. Both cities are expected to submit their bid to once again host the state tournament.